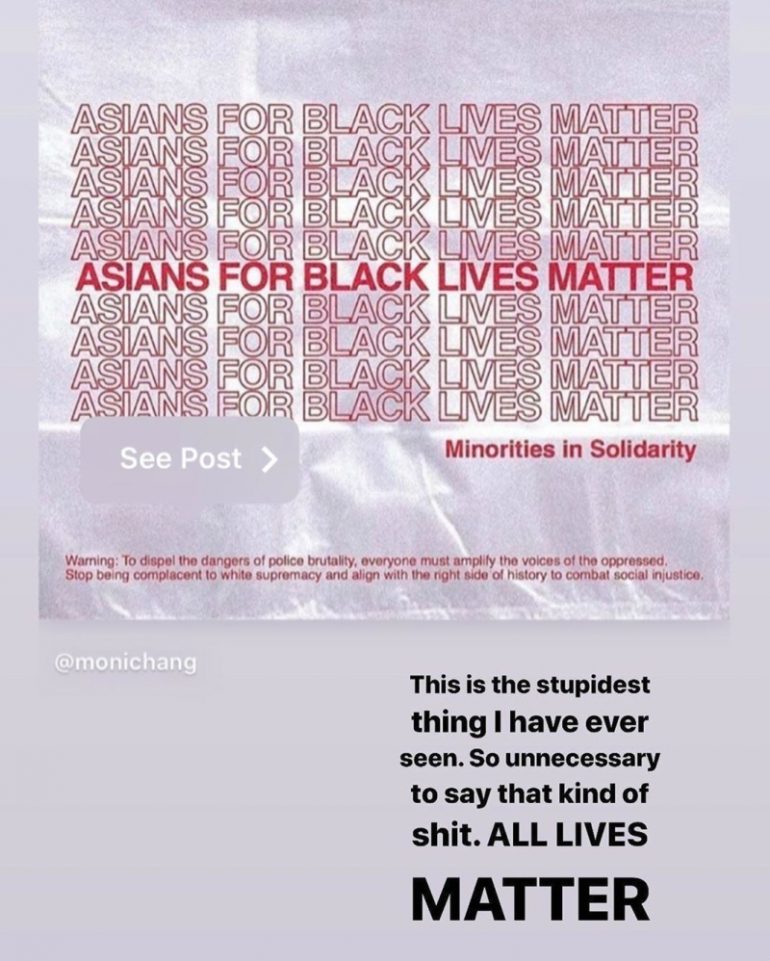 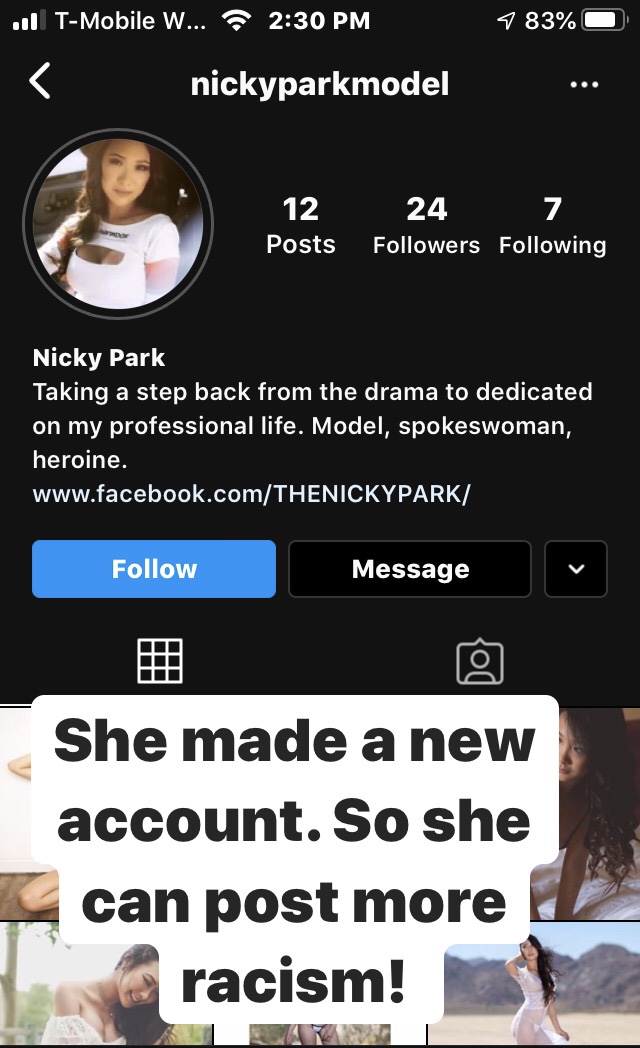 i think now this account could be a fake. Not sure.

also update: Nicky claims on her instagram she is going to the police for the constant harassment and threats she’s gotten. I actually saw one where I was upset reading. I reported it. I said “this isn’t helping the cause” also, getting racist comments like “coronavirus” which isn’t helping their cause. It’s really sad to read that. I have a friend who is Asian.

the podcast I did exposing her:

of course, Nicky Park. Has not reached out for comment. because she has gone into hiding. On social media. A comedian named David blasted her on Instagram about her racism and tone deaf response to the movement.

here is her response: 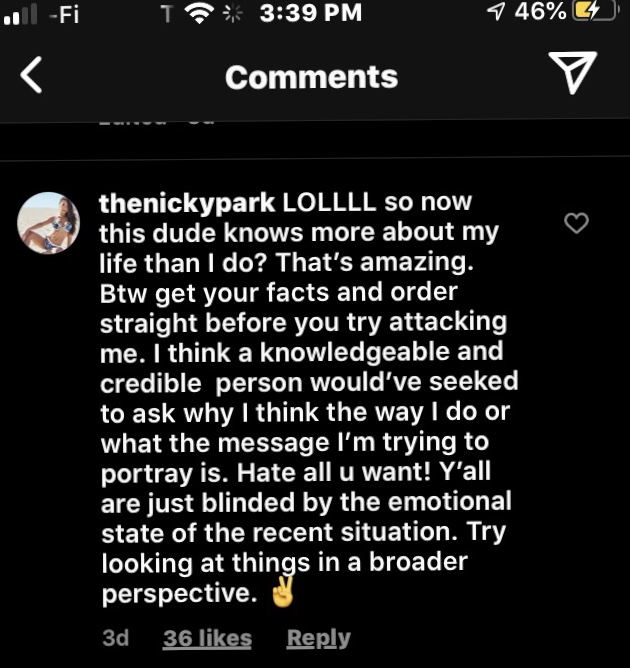 does this sound like a rational person that really cares and really admits to when she is wrong? Her thinking is wrong. This is what a narcissist looks like.

she had angered so many people they are chanting on social media using the phrase #BLACKLIVESMATTER in her comments. Also, have angered them so much. Sponsors For product ads on her Instagram have pulled their connection with the model. On top of that. I have complained to Spocom which is a huge automobile showcase of nice cars. Big car events. They told me “we will look into the matter” of both Nicky Park and Airica Moe.

she repeatedly on Snapchat and Instagram has said horrible things about her fans and other people for years this is karma for all the crap that she spews to everyone else.

fans are fed up with her. Fans on the forums have complained she never ships orders and she doesn’t follow through. Has excuses. Her Only Fans is expensive!!! she charges $20 a month for a subscription service and on top of that charges $200 for an oral sex video with her boyfriend. Which has a lot of bumps and a wrinkled penis. which is very tiny! Her vagina has a lot of labia as well in the pictures that I have seen. her asshole looks like a winking eye. Because of my server. Pornography is prohibited. But, the leaked images of her is ridiculous.

she also has made claims about being drunk and taken advantage of when those photos of her leaked online of nude photography. one fan wrote “I remember she said she wouldn’t do nudity. Because she doesn’t like the anatomy etc” well… there is lots of nudes of her. Also, sex videos.  In fact I believed her. Myself and a photographer took down pictures of her leaked on an adult website. She told me that she appreciated me doing that. Now, I feel she just likes attention. The problem with people like her is if you tell a lie big enough and keep doing it eventually you’re going to believe it and everything you say is a lie and you think it’s truth and that her and her boyfriend are like the Korean Trumps. of this generation.

her boyfriend on his Facebook account slams Barack Obama on a lot of political issues. he even has a friend who uses anti-somatic slurs and degrades Jewish people.

So while I make this article of how horrible of a human being she really is. at least people know the truth of who this person is. she is a racist, a manipulator, prejudice against autistic people, attention seeking, drama queen. That’s all she is. she needs to look at herself in the mirror and realize who kind of a person she is. Because she is a disgrace. She even doxxed me. Posted private information about me of where I lived and told people “give him hell” model friend Airica Moe. Sent a death threat to me a decapitated man and a transgender using her own penis to insert in her own ass. When I called her out on it. She blocked me. So they ridicule and bully an autistic person. They have also called me a “rapist” because, I made a joke on her Instagram with the words: “hey, maybe after the show we can do fuck later. Lol” somewhere around those lines and somehow she thinks of me as a rapist. I am a pacifist. Considering.. on her Reddit account “Sandnshow” posted a picture of herself bent over on the bed telling people “what would you like to do to me?” In graphic detail a man says what he wants to do to her sexually.

But, she has the audacity  to accuse me and call me a “rapist?” Most of my friends are women. I am a pacifist. “ A person who does not believe in violence and war of any kind and settle disputes with other non-violent means“ that is the definition of pacifism but she’s too stupid to realize it. So now you all know the truth of who she is. She not only called BLM “terrorists” “uneducated” she called an autistic man “a rapist” “a stalker” “a creeper” “file a restraining order for harassment”

she also has called my sister “a bitch”

none my family sucks dick for money! you go around saying that “black people are uneducated” when you are an escort. based on the claims of a former photographer and an Instagram user.

this is the kind of person she is she is a manipulator. She is a liar. She is a horrible person I hope to God she loses Fans and she no longer has clients. I hope she can look at herself in the mirror and realize what kind of a person she has become.

Apple removes “where can I dump a body” from Siri. 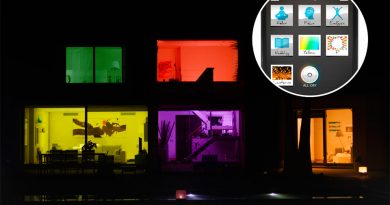